Hey, Mister, do what comes Natural and open this brand new issue of the WFSC Hard-A-Lee 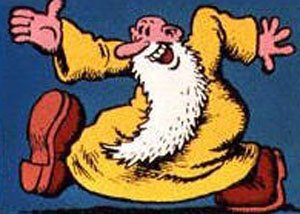 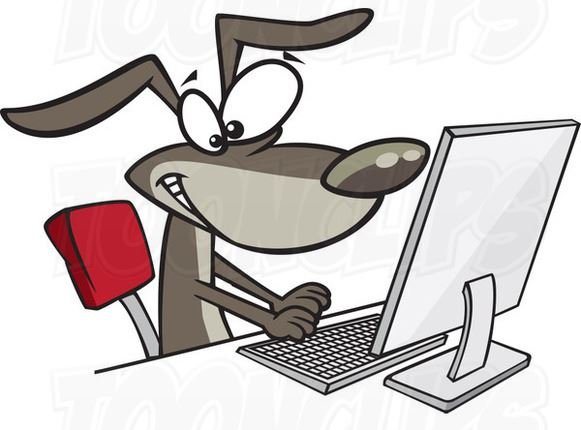 Hot Dawg ! Here's another issue of the WFSC Hard-A-Lee

At its recent July meeting, the WFSC Board of Directors accepted another membership application.

Joining the club are James and Janet Ward of Graham. They will be bringing in a Skipper 20 sloop.

Welcome them when you see them at the Club.

Also at the meeting, Past Commodore Steve Colley agreed to develop details and take bids for producing some new WFSC shirts. We haven't printed a T shirt in a couple years.

The Club's kickoff social went so well, we've decided to do it again on July 3

Forty or so WFSC members and friends gathered at the Pavillion June 26 for our first attempt at a post-pandemic club-wide social event.

Burgers, hotdogs, fixings and great desserts were on the menu, as was lots of friendly conversation.

The event was going so well that Commodore Debra Halter stood up and declared we will be doing it again on July 3 ! And we think she meant it, too.

As always, on the Fourth of July weekend, many folks are at the club celebrating, sailing and getting ready for the fireworks show.

This year the Club will be adding to that with an informal burger-hotdog offering, beginning in the late afternoon. 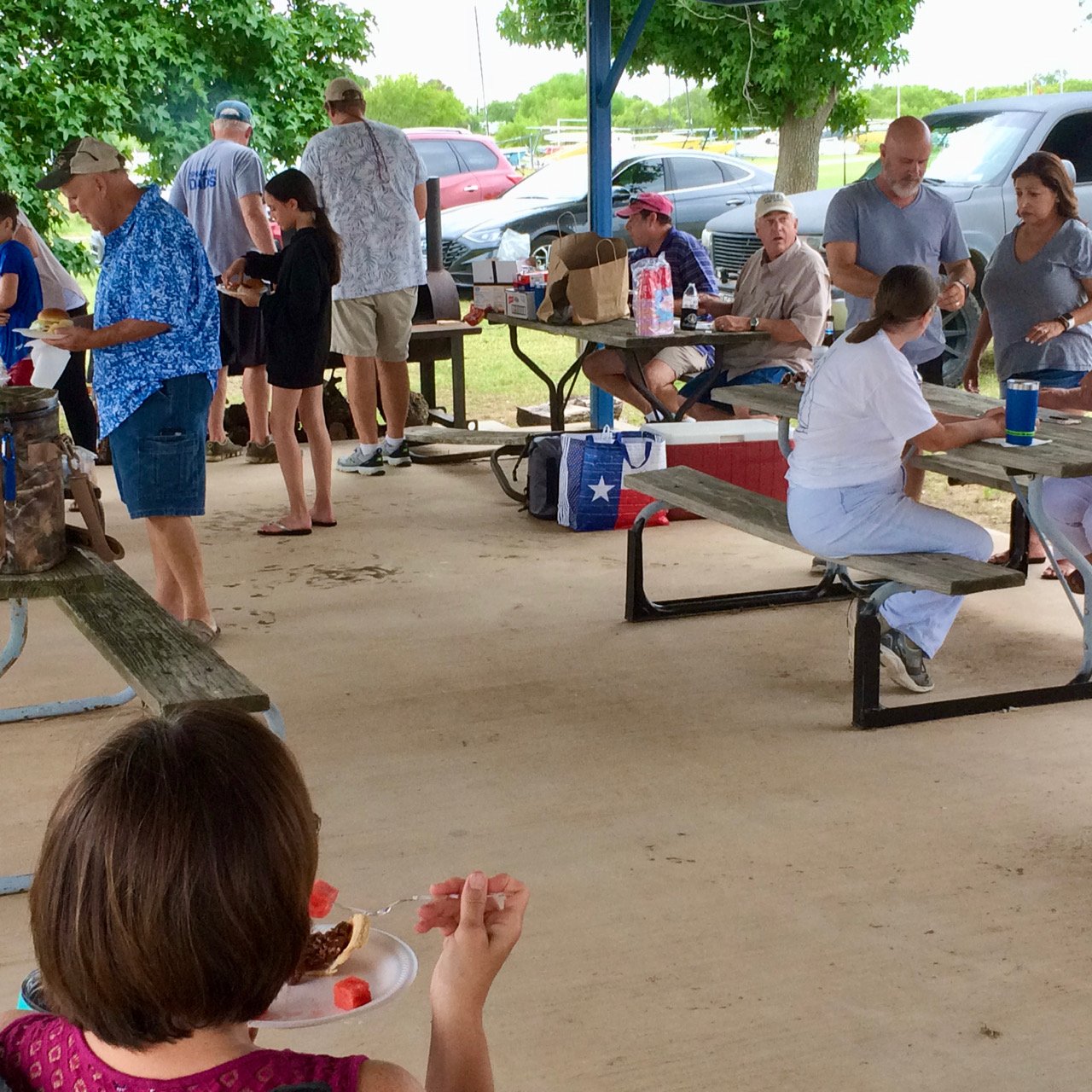 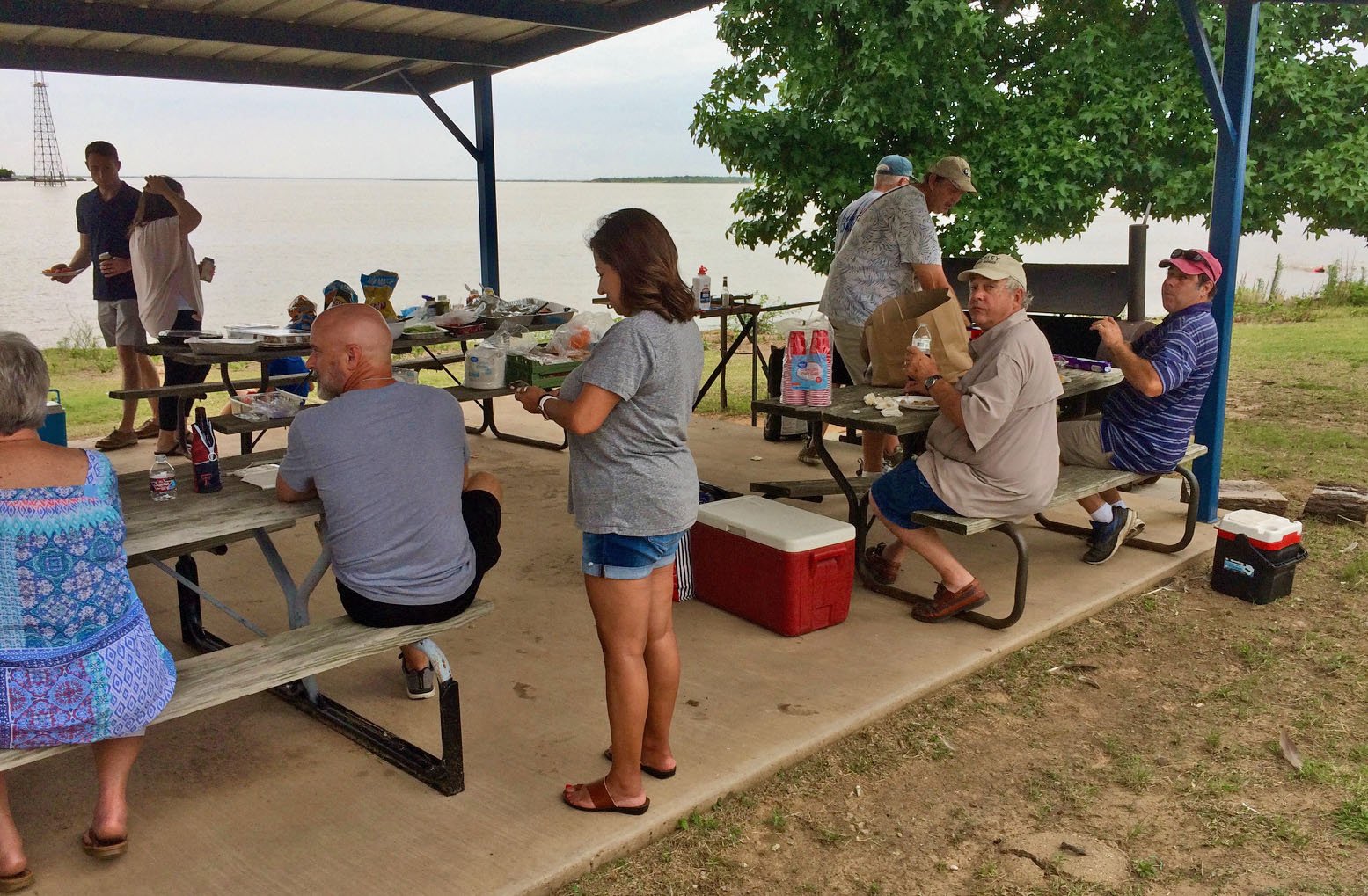 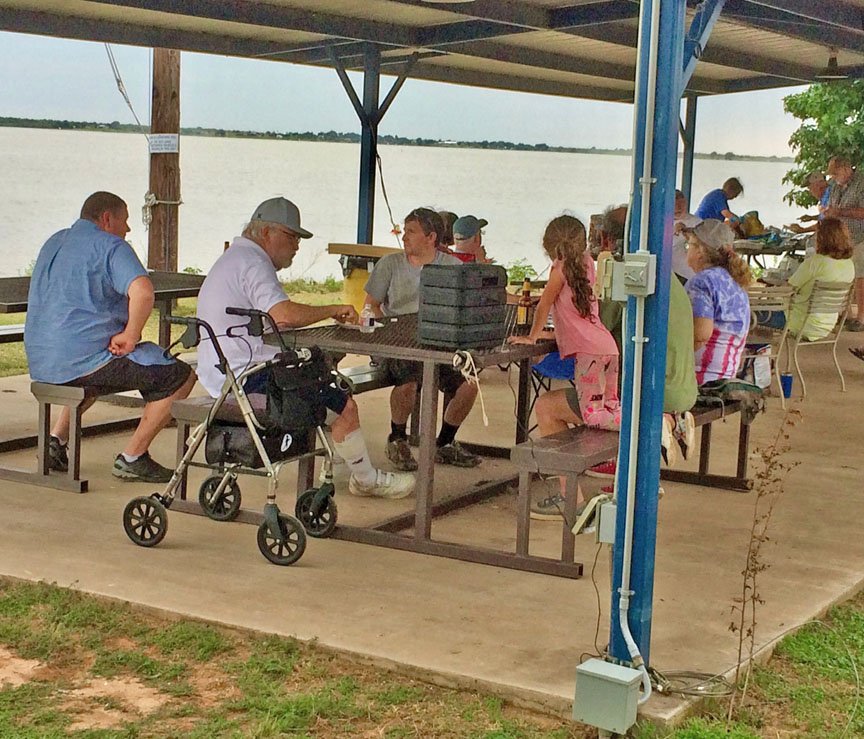 The WFSC Board of Directors, meeting June 3, voted in another new family member. They are Gary and Jenni Blankenship of Seymour. They have one daughter, Harlee Kate. They will be bringing in a Catalina 22.

Welcome the Blankenships when you see them at the Club!

In other action, the board determined to get bids on several proposed projects: laying a concrete slab in place of the old lower wooden deck (which was recently removed); repairing or replacing the ceiling in the Clubhouse's Great Room; and building a wheelchair ramp for access to the deck. Also being investigated is the possibility of purchasing and installing a defibrillator for the Clubhouse.

After the costs are determined, the board will decide which of these projects should go forward.

House Chairman Bink Davidson is putting his foot down. Specifically, he's tired of putting his feet down on top of the Sunfish/Sailfish sail rigs that have again spread out onto the floor of the Clubhouse storeroom.

As a result, the WFSC Board wants members who are storing a sail rig in the storeroom to come in and clearly identify which of the items are theirs. You could do this, for instance, by putting a piece of duct tape on your Sunfish mast or sailbag and writing your name on it so it can be easily identified.

Properly identified rigs will go back on the storeroom racks, which were installed years ago for sail rig storage.

After a month or so, unidentified property will be removed from the storeroom. 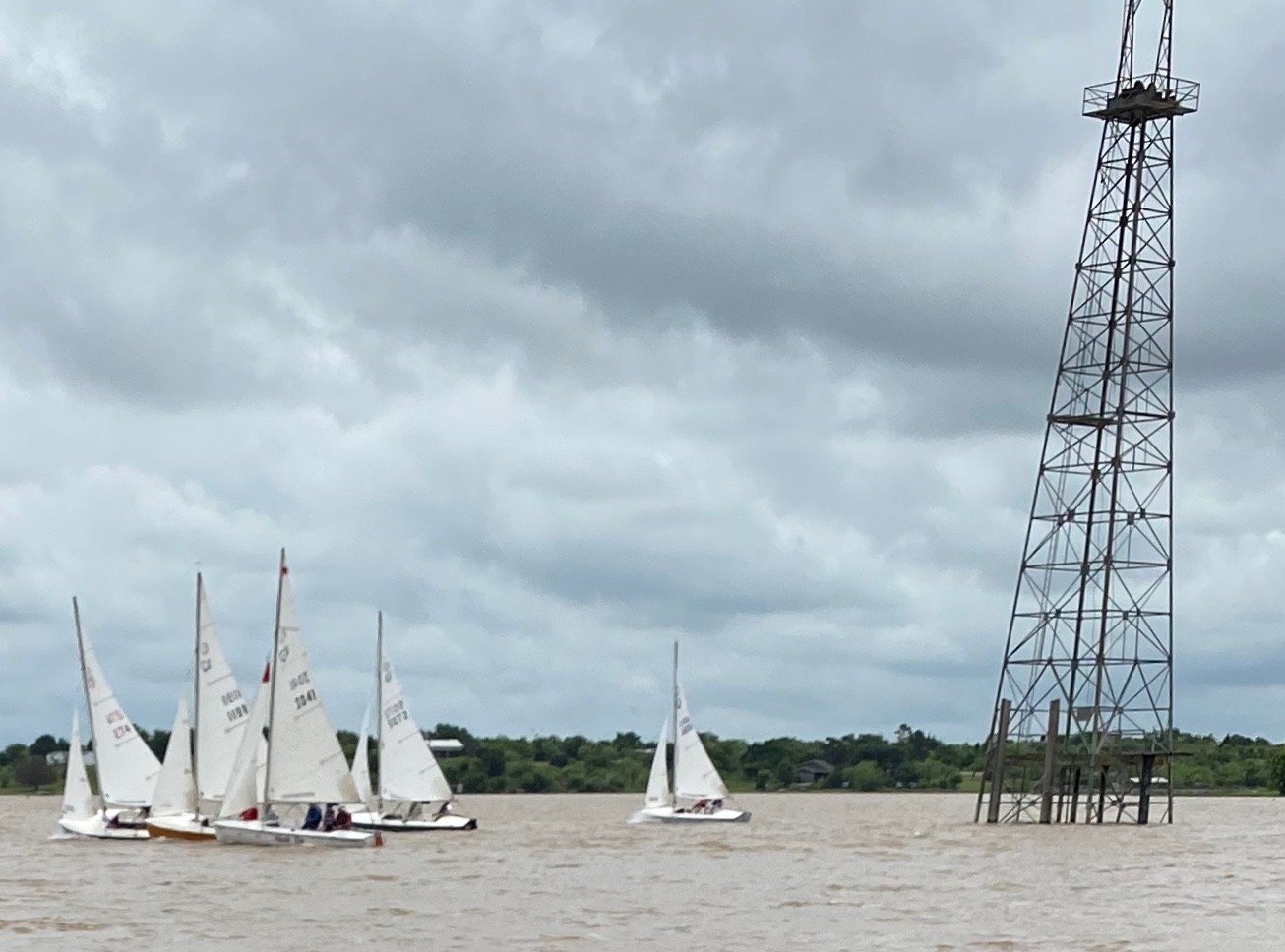 But what I heard was that Zach Whalen topped a fleet of five boats in three consecutive races on a grey and gusty afternoon.

Scores for the remainder of the fleet included:

The fleet will race again June 19. Skippers Meeting at noon (except for Zach, for whom the skippers meeting has been scheduled for 2 p.m. . . .just kidding)

Yet Another Hard-A-Lee, hot off the press

Larry Ahlhorn and Ronnie Brasket each won a race Saturday (5-1) as a half dozen skippers faced off in the WFSC Spring Regatta/Big Boat Handicap Series.

The first race course (A-B-C-finish) became a long one as the wind waned for a while. The first boat (Brasket) crossed the finish line after 90 minutes. Larry Ahlhorn was several minutes behind, and won on handicap (Brasket was second). The second race was shorter, an A-C-finish course, and the wind picked up. Brasket finished first boat-for-boat and on handicap, taking only 25 minutes to complete the race. Ahlhorn was second.

As the second race wound down, heavy rain clouds moved in and Race Committee Lee and Kim Havins called off the third race.

For the day, Steve Colley scored a third and a fourth; Dave Brunner, a fourth and a third; John Kidwell, a fifth and sixth; Derrick Christoff, a DNF and a fifth.

In between races, Colley and his crew Matt Baker completed an athletic self rescue after a clevis pin popped out of one of their side shrouds. Impressively, they managed to save the mast, and equally impressively, Colley had a replacement clevis pin aboard. Lesson learned: spare parts are your friends. 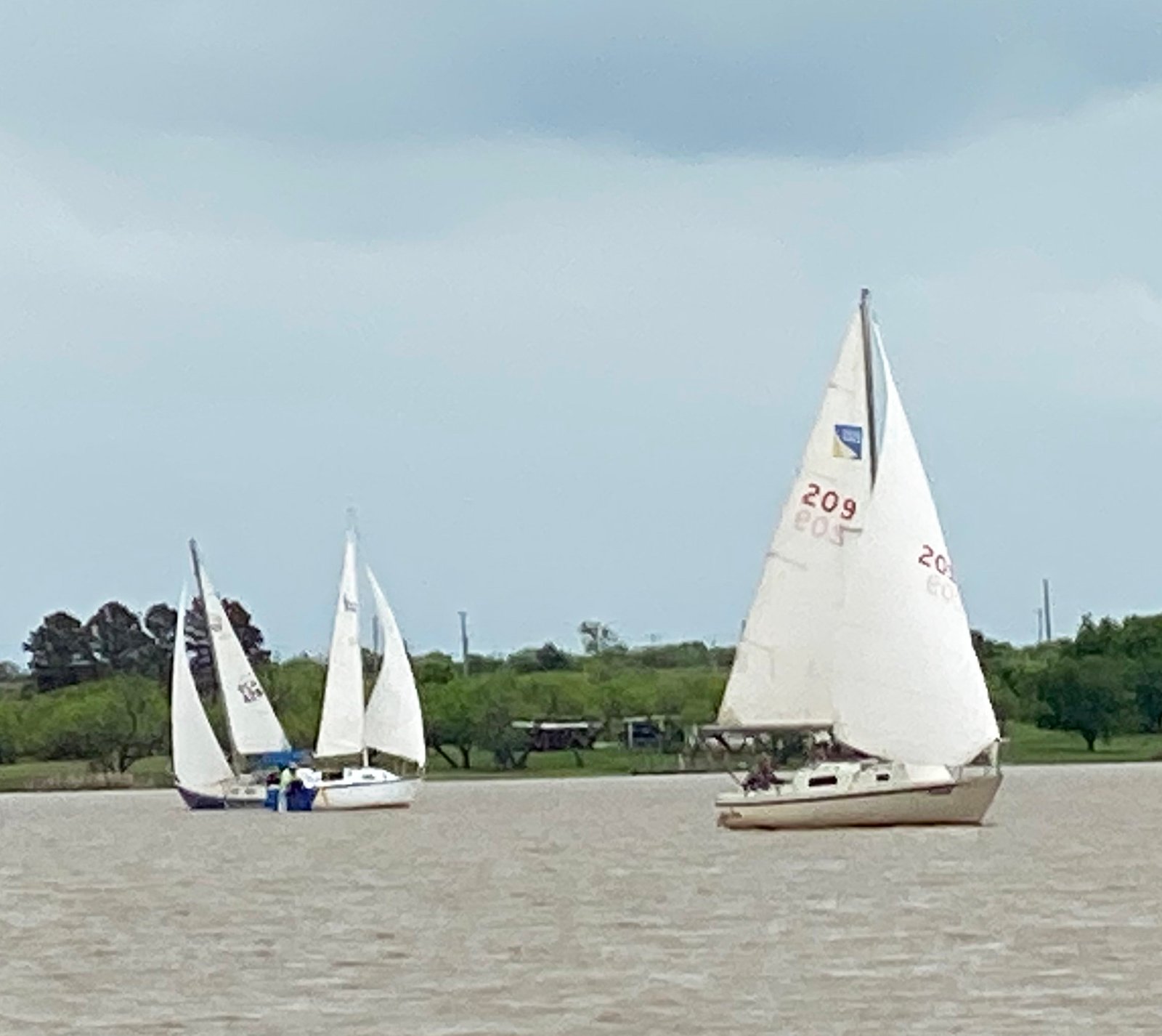 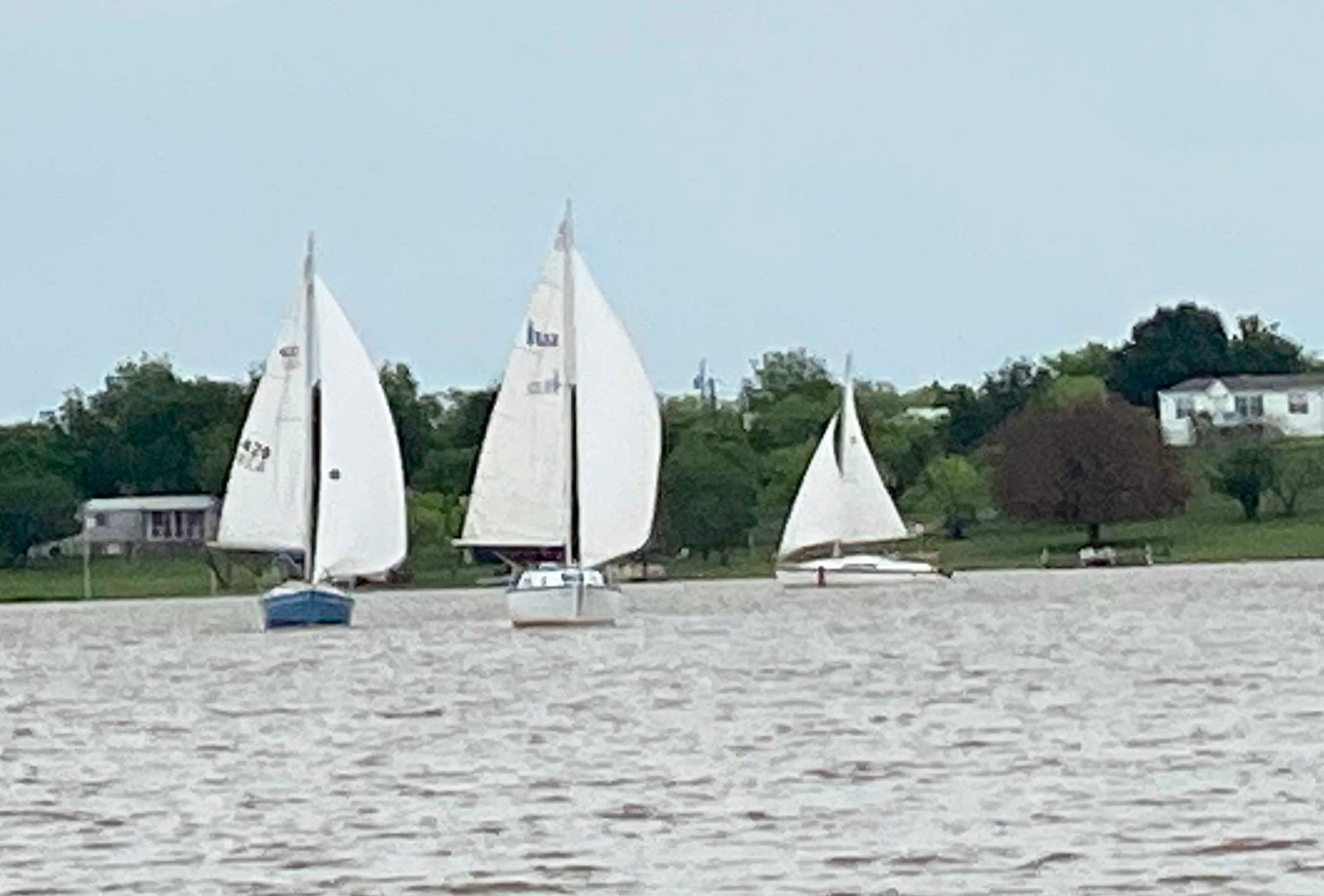 In top photo, Larry Ahlhorn crosses paths with John Kidwell prior to a start. In middle pic, Ronnie Brasket heads for the finish as Dave Brunner and Steve Colley vie for position at the club's "C" mark. In bottom photo, Brunner and Colley race for home as Derrick Christoff rounds the "C" mark. (photos by Kim Havins)

Like a big flock of geese (actually, out amongst various flocks of geese), nine members of WFSC Flying Scot Fleet 170 sailed Saturday (4-24) for a couple of make-up races to begin that series for the year.

Steve Priester won the first race, even after being called "over early" and having to re-start. New fleet member Zach Whalen won the second race.

Derrick Christoff, sailing the old Funky Chicken (which was the first FS ever at WFSC), took second place in both races. 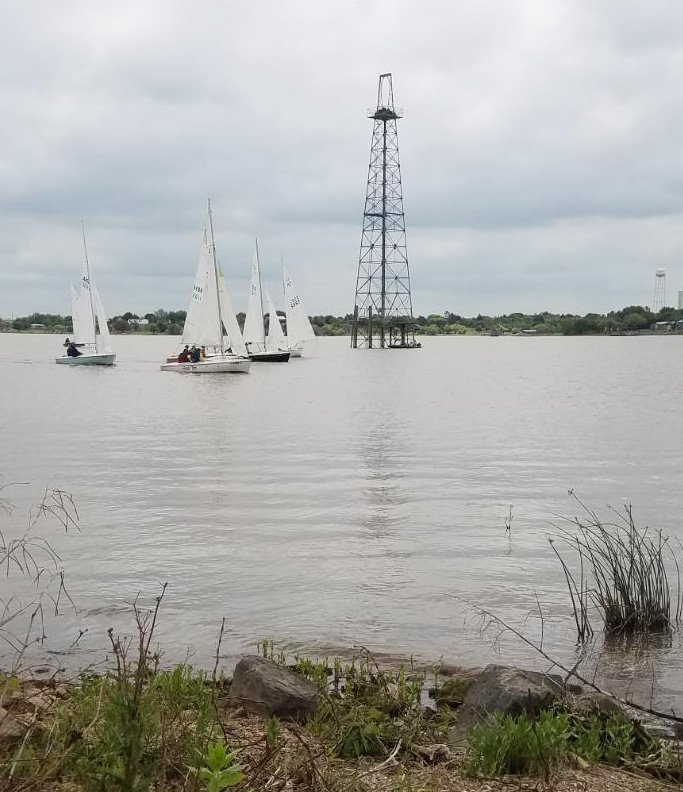 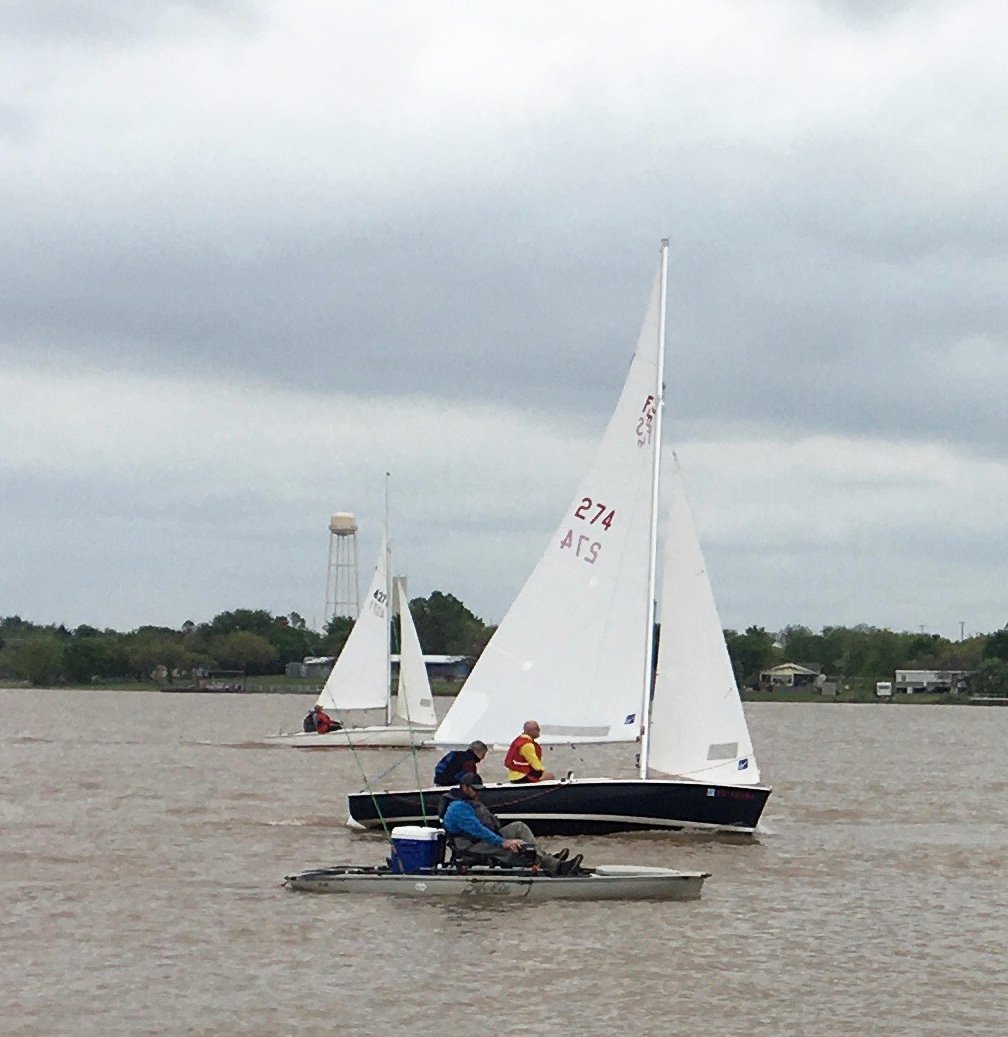 It was a fairly gray day throughout with a brisk north wind, which caused significant difficulty launching and retrieving the large number of boats in our limited dinghy area.

Kay Brunner took the top photo of the fleet heading to the starting line. Later Race Committee Rob Havins (et al) captured the pic on left, which includes some kind of UFO (unidentified floating object) cruising through the start-finish line. 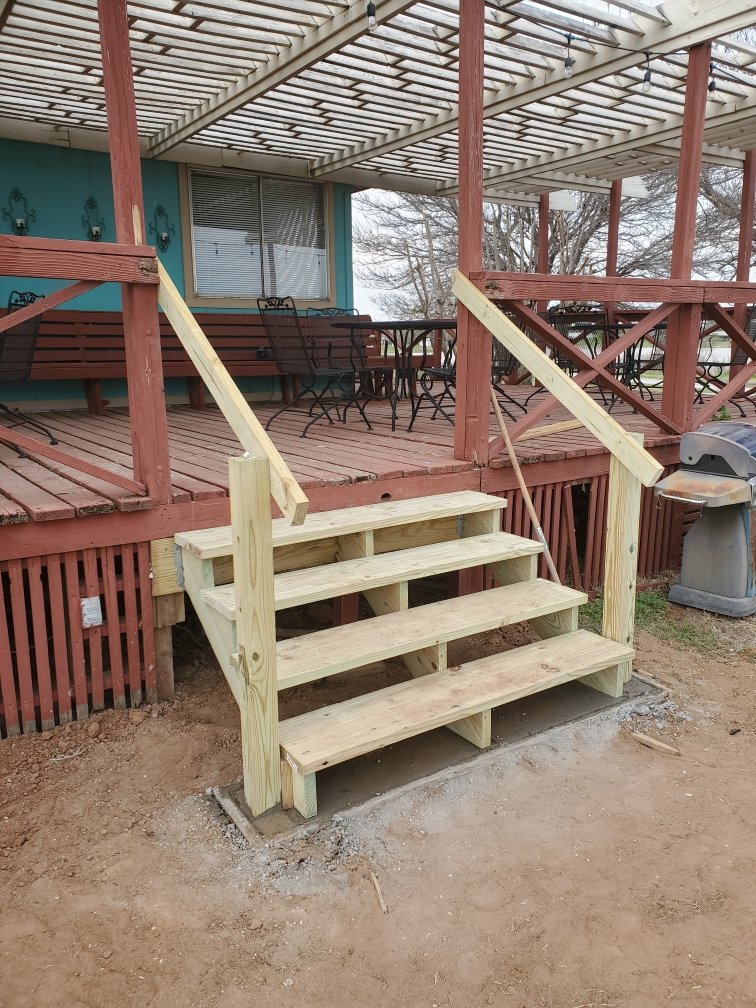 HOUSE IMPROVEMENTS: WFSC House Chairman Bink Davidson has been busy on several projects around the Clubhouse. Indoors, the ceiling (damaged last year by roof leaks) has been repaired. Several deck projects are under way, also, including these new stairs. Club members Larry Ahlhorn, Derrick Christoff, Mike Gillis and Jim Loudermilk have been working with Bink on the project. (posted 4-13-21)

Seven WFSC boats hit the lake in a good breeze Saturday (4-3), opening the racing season and the Handicap Fleet series. 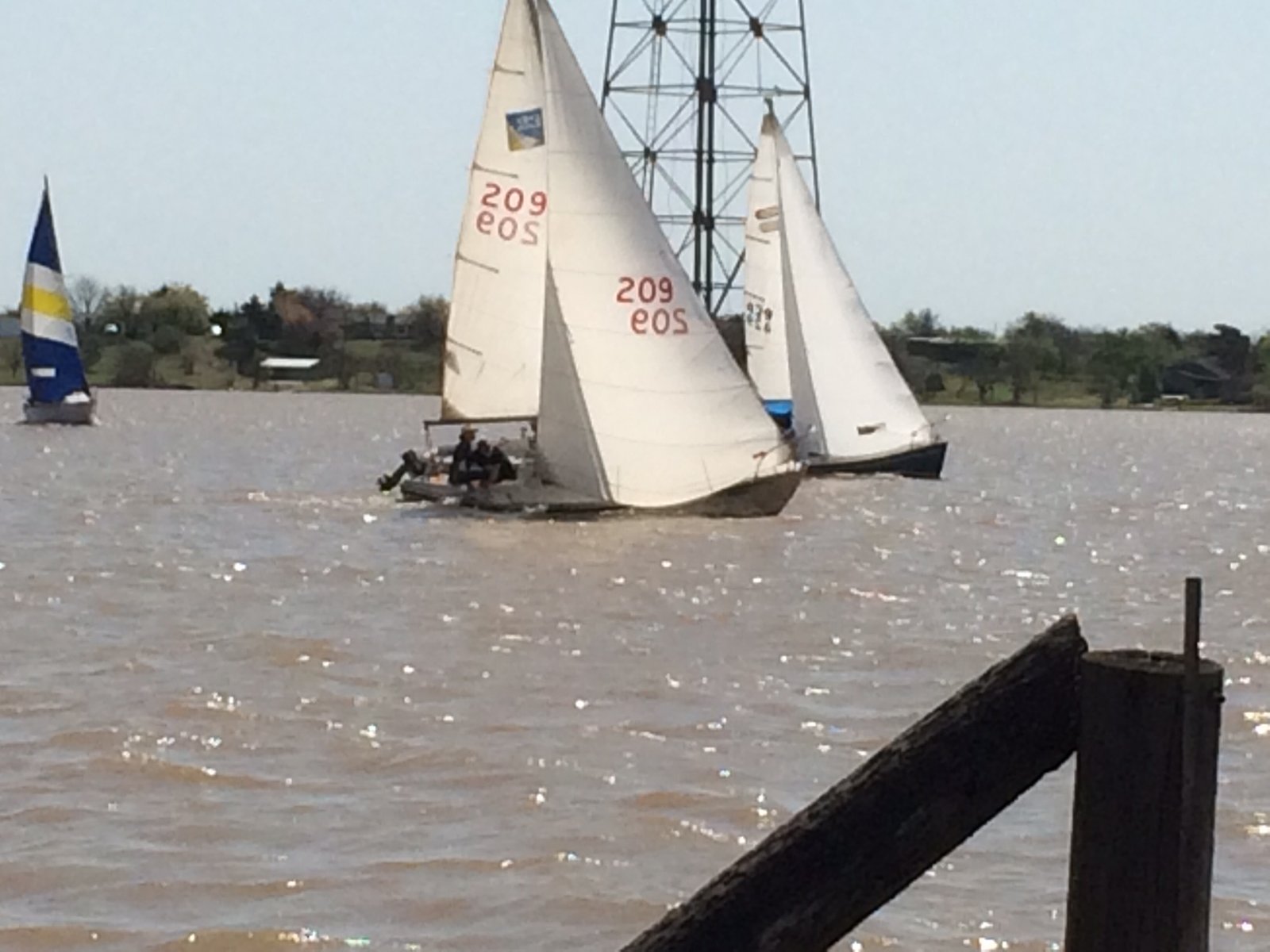 Making up the remainder of the fleet were Derrick Christoff, Mike Gillis, John Kidwell and Brad Merrick.

It was a beautiful day and a good show, enjoyed by a small crowd of onlookers.

Doggone! Here's another issue of the Hard-A-Lee. 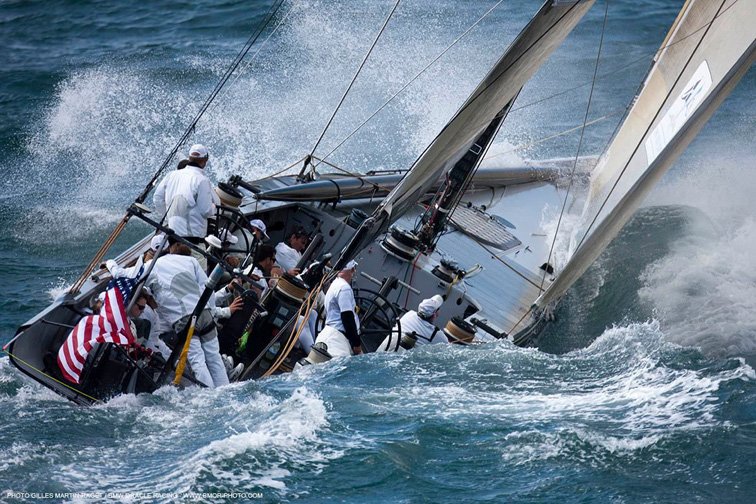 THE NEW RACE SCHEDULE IS OUT !

Also included are three one-day regattas, which can be enjoyed by just about anybody in just about any boat. Hopefully, we will be able to incorporate some of our social schedule into these, also.

View the schedule in the Racing Tab.

WFSC's racing skippers and crews will get together Feb 23 to form up a schedule for the upcoming sailing season.

The Club has reserved a room at The Forum, 2120 Speedway Ave. The event will be 6:30 to 8 p.m. We will be using an entrance on the east side of the building.

The venue should give us enough room to have a safe and enjoyable evening as we set the schedules for the coming season and discuss any other issues. Schedules will be developed for the Flying Scot fleet, the handicap “Big Boat” fleet and for a
“fun-run” Wednesday evening dinghy fleet. Any other type fleet could be considered
(at least three skippers required).

This event will be BYOB. Some snacks will be provided by the Club.

The WFSC Board is looking into hiring a contractor to rebuild and reinforce portions of our Clubhouse deck and handrail system.

Steve Priester reported to the board, at a recent meeting, that he had received a couple of contractor bids on various improvements. Board members narrowed the scope of the project to rebuilding and reinforcing portions of the deck and handrails. Suggestions that we also contract for a solid roof over the deck were put on the back burner for the time being.

The project, as it now stands, would have the Club spending about $7,000 to bring the deck up to snuff, including additional joists underneath, replacement of any unusable boards, replacement and redesign of handrails, step repairs and painting.

Also at its February meeting, the board approved a reservation for use of the Clubhouse, on May 15, for the wedding of Bink Davidson and Sheryl Mahon. Also, February 23 was selected as the date of the annual fleet meeting (see separate story). 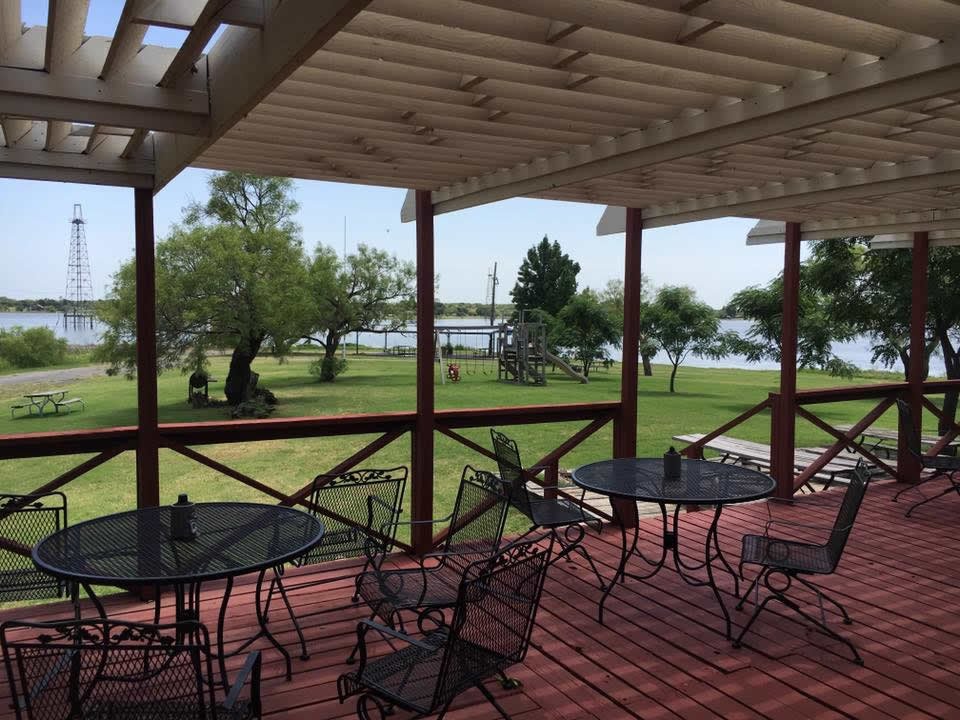 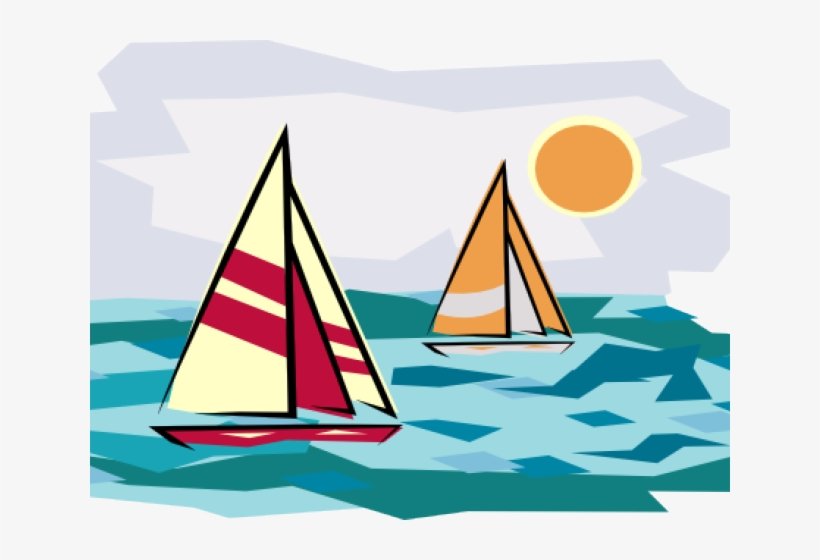 In our haste to put 2020 in the rear view, we forgot to mention the winner of last year's Tracker competition.

Last year several WFSC sailors reported their time on the water, using WFsail.org's Tracker Tab, to see who could accumulate the most sailing hours, and Doug Gray, aboard Amazing Grace, amassed the most.

Congratulations to him and his crew!

Santa sacked out as soon as his big day was over, but his elves were so stoked on Red Bull that they ginned out a post-Christmas WFSC Hard-A-Lee. 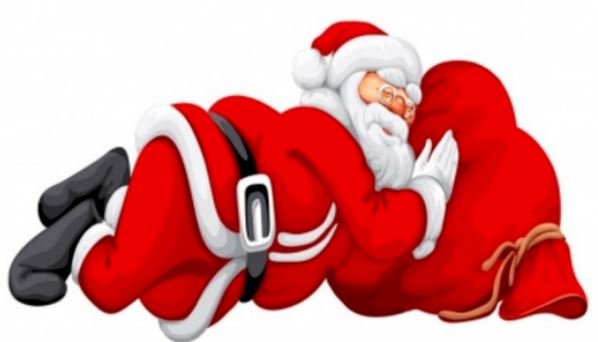